An Arduino Based Four Event Sequencer

When putting together a system using RF switching relays, Low Noise Amplifiers (LNA) and RF power it’s important that things are switched at the right time and in the correct sequence. This ensures that the relays do not actually switch with RF present (hot-switching) and sensitive LNAs are not damaged due to excessive input levels. The sequencer ensures that the relay has time to switch contacts before RF power is applied and things are in the correct state before the next event occurs.

My 144MHz EME system uses a W6PQL based sequencer which has worked very well over a number of years. A new sequencer was needed for my 10 GHz system. I decided to investigate the use of an Arduino to control the switching from receive to transmit (RX > TX) and then transmit back to receive (TX > RX) .

The photo above shows the end result of my sequencer project. Once again there’s nothing particularly new in what I’m describing here as far as the use of an Arduino and a simple Sketch. A quick search online will show a number of Arduino based sequencer projects. What may be of interest here, is the simple hardware used and ideas behind the construction that in its simplest form uses two modules (Arduino + Shield) and a 10k resistor.

The heart of the sequencer is an Arduino UNO and a four relay board (Shield) that fits directly onto the Arduino. The use of this Shield simplifies the overall construction and provides four switched events. The Arduino and Shield operate from either 5V via the onboard USB socket or 7 – 20V (ideally max 12V) via the power socket / Vin connector. As my 10 GHz setup uses 12V / 28V I included an additional regulator so that the small onboard regulator on the Arduino board runs with only 9V input and doesn’t run too hot. To ensure that the Arduino was not affected by any strong RF signals and also that any harmonics (noise) from the Arduino clock (16MHz) were kept to an absolute minimum all the power and switch lines are via feed-through capacitors. The complete set of parts fit nicely into a Hammond die-cast box.

Each of the four relays can switch from either a Normally Open (NO) or Normally Closed (NC) state when going from (RX > TX) or (TX > RX).

The sequencer is activated by grounding a control pin (A0) on the Arduino by either pressing the microphone PTT switch, pressing a foot-switch or in the case of PC based software via a serial controlled switch. This pin needs a resistor (10k) to PullUp when in the RX state. 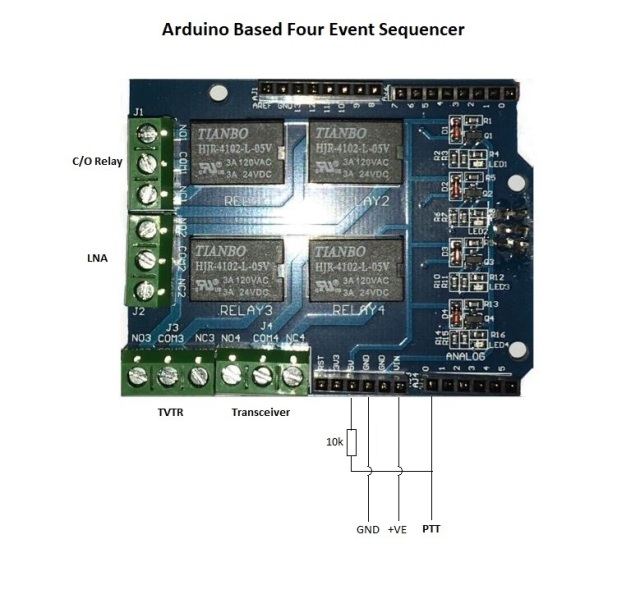