One of the key things that I have learnt from my EME activities is that frequency accuracy and stability is very important. My current 10GHz equipment comprises of a DB6NT G4 Transverter (TVTR) and an ICOM IC-706 transceiver for the 144MHz IF. The TVTR is designed to be used with a (10MHz) reference source. The IC-706 in its standard form does not have this capability, nevertheless it is possible to do, and without any major changes to the radio.

My IC-706 is the early model, what I would call the Mk1. It’s the one that has no push-button band change switches on the front-panel and no 70cms band. It does however have the same reference oscillator (RO) frequency (30MHz) as the later models which is important. Searching the Internet for information relating to “IC-706 Reference-Locking” resulted in very little that was specific to the original Mk1 model however the information by SM6FHZ looked very promising.

Based on my experience of this early IC-706 I would say that the frequency stability is surprisingly good for what is now a rather old radio. After the first 15-30 minute warm-up period the frequency drift on 144MHz was perfectly acceptable for “normal” digi-mode use, with the exception maybe of WSPR. I’ve never run the IC-706 at more than ~10W on digi-modes so it’s possible that at higher power levels the cooling fan may have some effect on frequency stability.

The results above demonstrate that the early model IC-706 is surprisingly stable and is probably fine for use in most radio shacks. However, working portable (/P) where temperatures can vary considerably, and where you may not have the luxury or desire to wait for the equipment to warm up, you need it to be as accurate and stable as quickly as possible. To achieve this an accurate frequency source for both 10 MHz and 30MHz is needed and one that would work outdoors (battery operation) and preferably be GPS controlled. I already have a homemade 10MHz GPSDO but this cannot work outdoors and it is an integral part of the shack / EME setup. So I now had a good reason to purchase the Leo Bodnar GPSDO   🙂

The GPSDO unit arrived within 48 hours of ordering online. It had 2 x 10MHz output as its default configuration. The device was recognised immediately by my Windows 10 PC and the downloaded software displayed the default configuration. I disabled the second output, set the RF output level to minimum and connected the GPSDO to the TVTR. Listening to, and looking at a reference locked 10GHz signal source I could immediately see the frequency correction (<1kHz). The next step was to change the configuration to output both 10MHz and 30MHz. Now this did prove initially to be a bit of a challenge.  Once I had grasped the method of setting the second output frequency I soon had exactly what I wanted. Here are the settings should you need them:

Now, this is written for the later model but having adopted the same approach to my older model I appear to have achieved the same results. There are some minor physical differences to be aware of:

The following photos should help show the approach that I adopted: 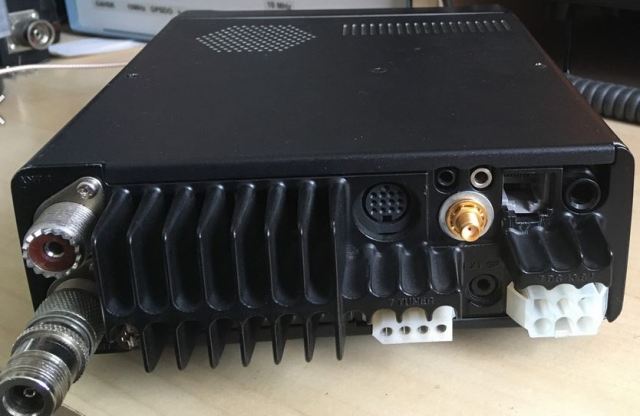 Adding the internal RG-316 cabling plus any external cable run to the GPSDO will alter the RO frequency. With the GPSDO and any external cabling removed the RO inductor can be adjusted to compensate for this for times when the rig is used without the GPSDO. With careful adjustment my IC-706 is within +/- 50Hz once warmed up (without GPSDO). This could probably be improved but unlike the later models the RO compartment lid does not have holes to facilitate tuning so removing / replacing the lid affects the frequency. Drilling holes in the lid might affect the temperature / stability… I chose to leave it alone.
With the Leo Bodnar GPSDO set to its lowest power output setting plus an additional 3dB of attenuation things work well. There are no obvious signs of anything untoward when looking at the 144MHz output signal on the spectrum analyser.

Here’s a photo showing the JT65b decodes of the 144MHz beacon GB3VHF. The “DF” is zero and there’s no change. 🙂