I’m still what some might call a novice when it comes to the 10GHz band. It’s a band that’s like no other that I’ve operated on, and I’m hooked on it. I’ve recently discovered first-hand the effect of rain-scatter at 10GHz and gained a small insight into what this fascinating propagation can offer.

Most of my 10GHz activity is done operating /P (portable) from a local site just over 5 minutes’ drive from my home. It’s not a particularly high spot but it has reasonable take-off from SW through to N. In all the times I’ve operated from this site I’ve never had much success in hearing things towards the East. At least not until a few days ago when the ON0EME beacon appeared via rain-scatter. This beacon is located in Belgium and is ~300km away. The following screen grab shows the Doppler effect (~100Hz spread) on the signal.

As my 10GHz equipment is all tripod mounted (i.e. sits about 1m above the ground) when it is setup at home in the garden, other than pointing up at the sky, it’s impossible to have a clear take-off in any direction due to either buildings or hedges.

My /P setup is not weatherproof and yesterday it rained on and off for most of the afternoon. It was also the second day of the RSGB UHF / Microwave contest. As I couldn’t operate outside I thought I’d try setting the gear up indoors, open the patio-doors, and point the dish up towards the dark rain clouds. Hoping that I might hear my nearest beacon (GB3PKT, 10368.945MHz) which is vaguely off in the direction of those clouds.

With the dish elevation set to about 5 degrees, I proceeded to slowly sweep the maximum arc possible out through the patio-doors. Doing this for a few minutes produced nothing. I then decided to point the dish up at about 20 degrees. To my surprise GB3PKT trace appeared on the screen, a tweak of the AZ / EL and it was audible! Here’s a screen grab showing the Doppler effect (~200Hz) and JT4g decode.

With everything peaked for GB3PKT I wondered if I might “see” any other beacons, so with the IC-706 Panadapter running I proceeded to click through the beacon frequencies (pre-loaded in the radio) and much to my surprise GB3LEX appeared! Now this really was a surprise (at least to me it was) as this beacon is ~157km away and the normal dish bearing should be ~312 degrees. My dish was currently pointing at ~60 degrees. Here’s a screen grab of the GB3LEX on the Panadapter:

Unfortunately this only lasted for about 5 minutes and then the sky brightened up and tests came to an end. 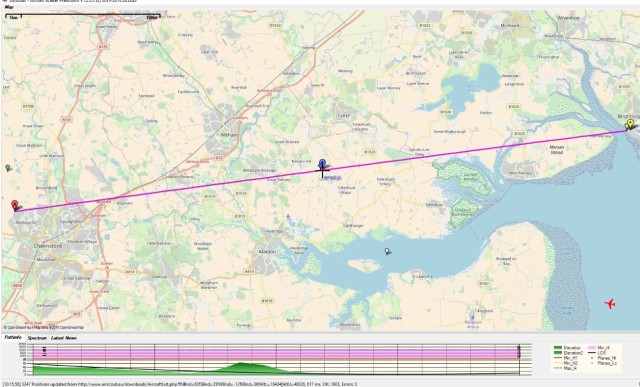 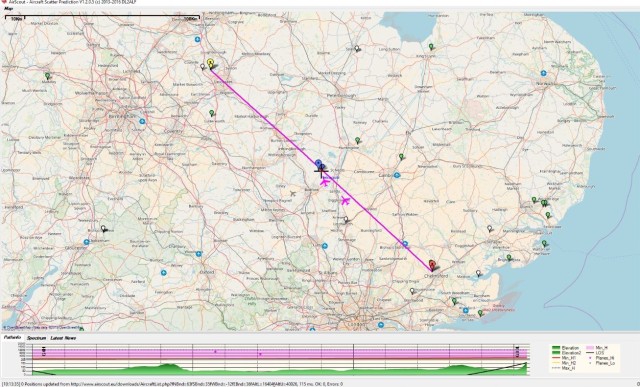 I’m looking forward to doing further rain-scatter tests, and the possibility of making contacts on 10GHz from home via this fascinating propagation.