The ProgRock is a kit produced by QRP-Labs. It is described as a triple GPS-disciplined programmable crystal, based around a Si5351A Synthesizer. Having read positive reports on the ProgRock I decided to order one, plus the optional GPS kit. I also ordered two LPF (Low Pass Filter) kits. The intention being to build a GPS disciplined 10MHz and 116MHz reference source to be used with a 2m and 23cms transverter.

The construction of each kit was straightforward. I opted to implement the recommended ProgRock power option (4.3.1 in the build instructions). Rather than use the standard supplied 27MHz quartz crystal, I also fitted a 27MHz TCXO module for improved performance.

Here’s a photo of the partly completed setup:

The above shows the ProgRock (top LH corner), two LPF boards (10MHz and 116MHz in the top RH corner) and the largest board being the GPS.

My initial testing was all done without the GPS board connected and focused on the 10MHz output. I was keen to understand how clean the output would be and the phase noise. The latter being possibly beyond my means of measurement.

A Farnell Lab (linear) PSU was used to power the ProgRock and this was set to provide 7V for the initial tests. It was very easy to program the two desired frequencies using an Arduino and the provided Sketch on the QRP-Labs web site. I did a quick test without any filtering in place, and as to be expected the 2nd and 3rd harmonics were very evident, being only approximately 18dB and 15dB down respectively. 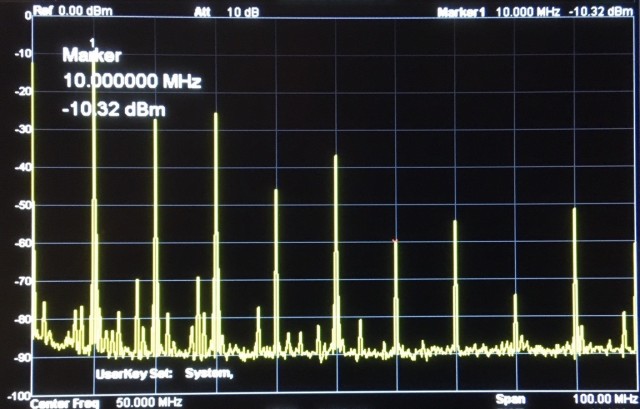 The output of the S15351A Synthesizer is square wave, so a LPF on each output helps to reduce the harmonic content and provide a sine wave output. The following photo shows the 10MHz output with the LPF in circuit.

The addition of the LPF certainly reduced the harmonic content, they were now >60dB down but there were still significant spurs lower in frequency, close-in to the wanted 10MHz output. To try to improve things further I built a simple Quartz crystal filter using two 10MHz HC-49US crystals.

Here’s the response of the simple crystal filter:

This entry was posted in Blog, EME and tagged ProgRock, Si5351A. Bookmark the permalink.