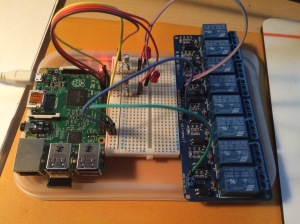 Today I picked up a project that I had started at the beginning of the year. It uses the Raspberry Pi (RPi) computer to provide remote control of up to 8 events, each switched by relay. My plan is to use this to control the power and switching of radio equipment located at a remote site. I had already got the basic functionality all working on an early model of the RPi, but that was used on another project.

Things didn’t start well, the image I had saved wouldn’t fit on the new (same size, but different make) Micro SD card I had. Fortunately I found another spare card and that did work. Then the image wouldn’t run on the latest RPi model 2B, so I had to take another RPi out of service to update the image before I could get started on the new hardware. I then ran into a number of other minor configuration problems due to some of the hardware and OS changes. Finally after an hour of messing about, it was all back to how it worked before the project was parked and robbed of bits.

I’m using a Sainsmart 8 relay module and a homemade transistor switching interface (just 2 events at present, on a breadboard) between that and the RPi.  Apache web server with some simple Python is used to display a simple web page with 8 buttons, each button controls an event by switching its associated relay on or off. There can be multiple connections to the web page and each user will have control and see the status of each event. Disconnecting from the web server leaves the events as set.

There’s still further work to be done to ensure that if things go wrong all events fail-safe. Also this model of the RPi is really an overkill, once things are all working this project will most likely be ported to the new Pi Zero.  🙂